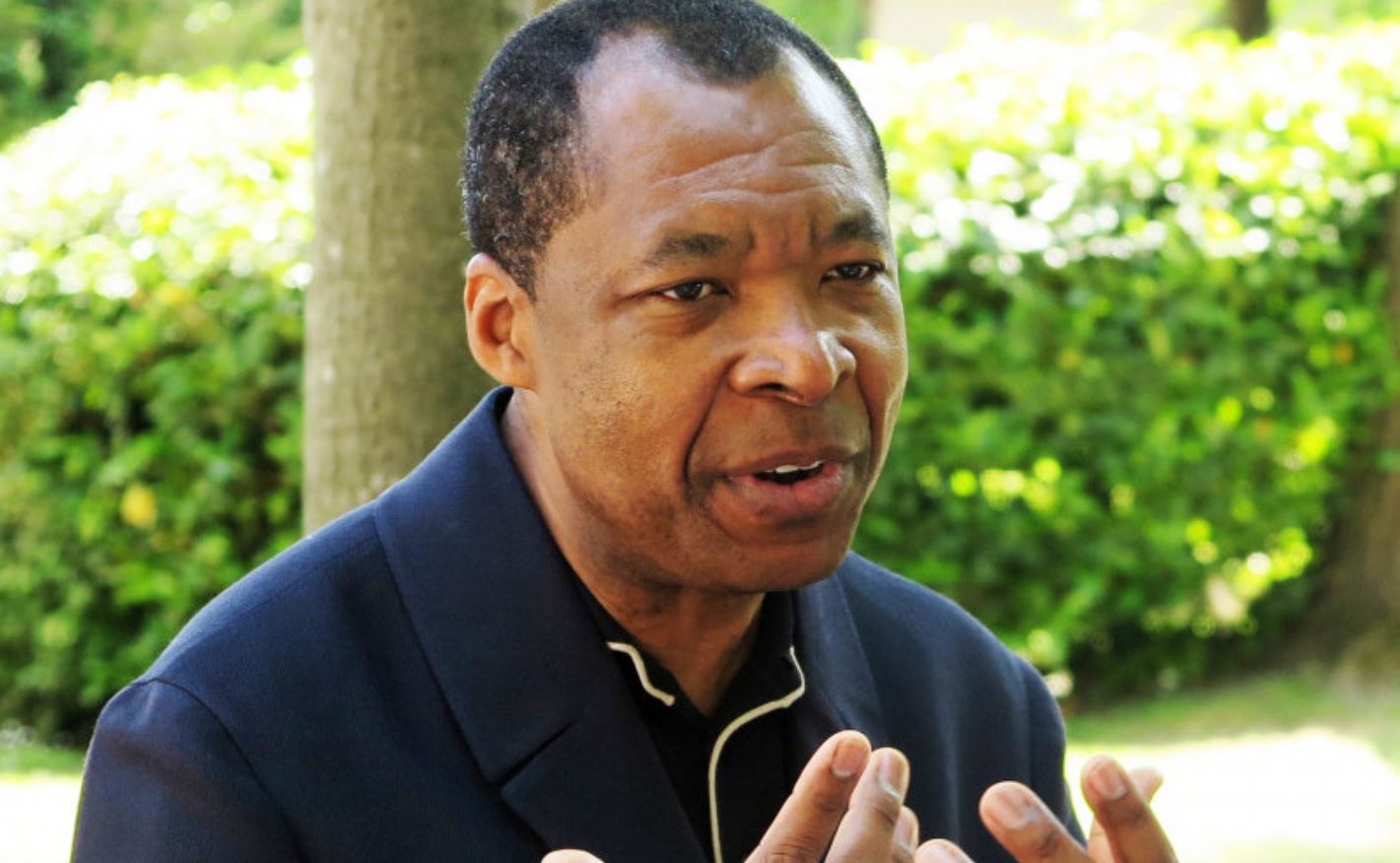 There were three assignments on Okwui Enwezor’s mind as he wrestled fatally with cancer in early 2019. The most widely talked about of the three is Triumphant Scale, the sprawling retrospective of the works of the Nigerian artist El Anatsui, which opened in Haus der Kaunst, in Munich, Germany on March 8, 2019, and has moved through four other major art venues on two continents, including the Mathaf Arab Museum in Doha, Qatar; Kunst Museum in Bern, Switzerland and Guggenheim Museum, in Bilbao, Spain.

Enwezor was also thinking about the 2021 edition of Sharjah Biennale, themed Thinking Historically in the Present, which he conceived, in project terms, to reflect on the past fourteen editions and to consider the future of the biennial model.

But the assignment which resonates most with the curator’s 25-year sterling career is, intriguingly, a far more local event than the other two and, well, narrowly focused on American politics. Titled: Grief and Grievance: Art and Mourning in America, it is a group show that Enwezor described as a response to the wave of “politically orchestrated white grievance” sweeping the United States and “the crystallization of Black grief” it produced.

Enwezor emerged as the world’s most important mediator on contemporary art largely because he came for diversity and inclusivity. He barged in from the outside to take the reins of the Metropolis of global contemporary art, located squarely in Europe and its satellite states. He brought with him the “others” from the margins into both the visual and textual narrative. His thesis was that the Western story is not the be all and end all, butjust a part of the global discourse. He didn’t beg to be invited. He snatched the microphone.

“Between the fall of 2018 and March 2019, Enwezor tirelessly worked on the show, drafting his thesis for the exhibition, compiling lists of artists and artworks, selecting the catalogue contributors, and speaking with many of the invited artists. In January 2019, the curator asked the artist Glenn Ligon to serve as an advisor to the exhibition.”

Then having become the legend, he began choosing whose art he would show at which universally significant gallery.

So, whereas Triumphant Scale and Sharjah Biennale are some kind of crowning glory exhibits, in which the Nigerian born critic and curator simply throws his own party, Grief and Grievance is about the struggle, the work that Enwezor originally came to do in the art world.

“Okwui wanted Grief and Grievance to be declared open as close to the American Presidential elections as possible”, the critic Chika Okeke-Agulu told me on the phone from Princeton University in New Jersey, United States, where he is professor of African and American Diaspora Art. “In his view, the exhibition is about black art in the age of Trump”. Okeke-Agulu is quick to insert a reminder that black grief (and white grievance) did not begin with Trump, but yes, “the main concern of the show is black art in the age of Trump”.

President Trump’s racist, divisive rhetoric had emboldened white supremacist aggression and encouraged extremists stomping about and charging that America was designed as a Lilly white country and that the coloured part of the population were a pile of smelly dirt in the living room and oily smears on the walls.

Grief and Grievance opened four days ago (February 17, 2021) at the New Museum in New York. It will close on June 6, 2021.Running on three floors of this gallery on 235 Bowery, New York, NY 10002, the intergenerational show brings together thirty-seven artists working in a variety of media, addressing the concept of mourning, commemoration, and loss as a direct response to the national emergency of racist violence experienced by Black communities across America. The exhibition interrogates “the intertwined phenomena of Black grief and a politically orchestrated white grievance, as each structures and defines contemporary American social and political life”, New Museum says in a statement. The works on view in Grief and Grievance comprise video, painting, sculpture, installation, photography, sound, and performance made in the last decade, along with several key historical works and a series of new commissions created in response to the concept of the exhibition.

In the Gallery’s telling, Enwezor was invited by the New Museum to organize what became Grief and Grievance in 2018. Around that time, he was developing a series of public talks for the Alain LeRoy Locke Lectures at Harvard University focused on the intersection of Black mourning and white nationalism in American life as articulated in the work of contemporary Black American artists. “The argument put forth in this series–which he unfortunately was unable to deliver–informed the ideas Enwezor would use as the basis for Grief and Grievance” New Museum explains.

Between the fall of 2018 and March 2019, Enwezor tirelessly worked on the show, drafting his thesis for the exhibition, compiling lists of artists and artworks, selecting the catalogue contributors, and speaking with many of the invited artists. In January 2019, the curator asked the artist Glenn Ligon to serve as an advisor to the exhibition. “Given the advanced state of planning and the importance of the exhibition, following Enwezor’s death on March 15, 2019, and with the support of his estate and of many of his friends and collaborators, the New Museum established an advisory team, comprised of longtime collaborators and friends of Enwezor including Glenn Ligon; Mark Nash, Professor at the University of California in Santa Cruz, and co-curator of many of Enwezor’s projects, including The Short Century and Documenta 11; and Naomi Beckwith, the Manilow Senior Curator of the Museum of Contemporary Art in Chicago, whom Enwezor had chosen as one of the jurors of his 2015 Venice Biennale. With the assistance of Massimiliano Gioni, Edlis Neeson Artistic Director at the New Museum, this curatorial advisory group worked together to realize and interpret Enwezor’s vision for “Grief and Grievance.” The curatorial advisors and the New Museum also see this exhibition as a tribute to Enwezor’s work and legacy.

New Museum says: “Enwezor saw Grief and Grievance as one of his most personal projects, and one of his most political. Within “Grief and Grievance,” mourning can be seen as a distinct form of politics, one that refuses a singular melancholy in favor of multifaceted forms of critique, resistance, and care. As Enwezor wrote in his initial narrative for the exhibition, “with the media’s normalization of white nationalism, the last two years have made clear that there is a new urgency to assess the role that artists, through works of art, have played to illuminate the searing contours of the American body politic.” In Enwezor’s view, the works in this exhibition help illustrate the idea that mourning is a practice that permeates the social, economic, and emotional realities of Black life in America as it is experienced across the country by multiple generations of individuals, families, and communities.

Okwui Enwezor’s stepping stone into the art world stage was the invitation to co curate  In/Sight: African Photographers, 1940 to the Present, produced by the Solomon R. Guggenheim Museum in New York in 1996. It was one of the first top western museum exhibitions “to present imagery from Africa by Africans themselves, beyond the stereotypes of Western ethnography” to quote the New York Times’ Jason Farago.

But his curatorial work at the Second Johannesburg Biennale, in 1997, foreshadowed what was to come: Enwezor wasn’t content with just bringing the natives to be part of the happening on the party floor, or organising a biennale for third world artists, but constructing events in which every member of the global rainbow of races is an important participant. What lets a work into a show is how it speaks to the theme, but even if it is in the show primarily because of the culture from which the thought process is derived, it is only selected, he often said,” because it poses durable questions”. 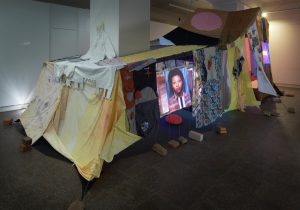 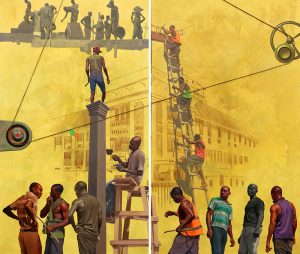