The Spirit of Asaba Haunts ‘The Enemy I Know’

Read More
PrevPreviousEkpuk’s Book Launches at The Park, Demas Nwoko Speaks at LABAF, Soft Magic at the Brits, Bernadine Evaristo in Town
NextThe Classier They Are the More DangerousNext

A convalescing billionaire dies unexpectedly and the scramble for his estate exposes the cupboard love that he enjoyed from several members of his family.  A fatal dénouement or is it?

Though the screenplay of The Enemy I Know is anything but taut, it manages to present engaging dialogue that keeps the film from being downright depressing.  Yet, stimulating dialogue is just one of the elements that enrich a screenplay.  Plausibility, understandability, subtext and a host of other dramatic components raise the stakes in movie-making.  However, what the film lacks in compelling storytelling, it more than makes up for in ostentation.  At the end of the day, opulence or, if you like, exceptional production value cannot take the place of an excellent narrative.

The Enemy I Know is still stuck in the Nollywood of Evil Men, where the wicked stepmother is the chief culprit in every tale. 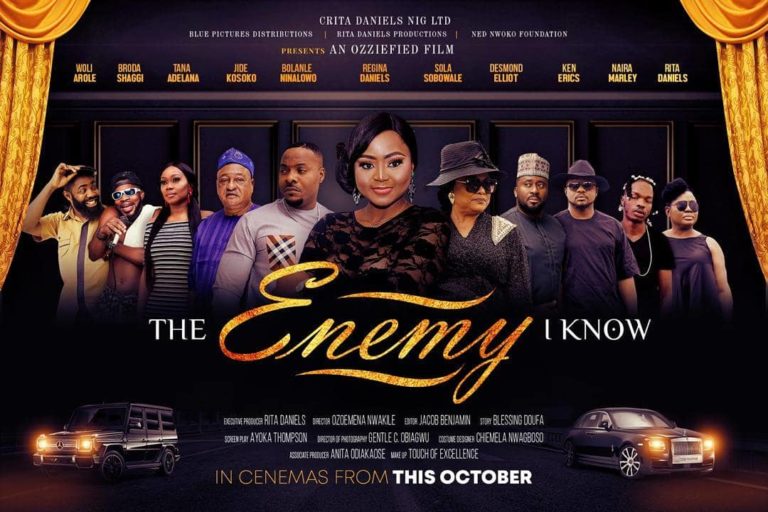 A major flaw in the film is poor character development.  Ken Erics as Richard does not exhibit any form of subtlety in trying to achieve his aim.  What happened to good old subtext?  It is high time Sola Sobowale began to turn down the role of a hyperactive woman because monotony has set in when you consider that she portrayed similar roles in Diamond Ring, Madam Dearest, The Wedding Party and King of Boys.  For an absolutely talented thespian like her, the audience continues to be robbed of the depth of her creativity as long as she gets typecast.

The employment of comedians for supposed comic relief is an awkward addition in almost every movie in the last few years.  It is infuriating that the antics of these comedians is mostly not sensible, to put it mildly.  In many cases, they come off as morons.  Who does not understand what it means to get water when it is intended to revive a life?  Some of the jokes Ebiye cracks in front of bereaved people are in bad taste.

If Zara’s death is the most unbelievable part of the movie, the appearance of her ghost to select individuals was totally ridiculous.  Nigerian film-makers still take viewers for granted, forgetting that the same viewers watch all sorts of brilliant content from around the world.  Why will anyone fail to shut the door to a room where he plans to commit murder?

Given the amount of money the producers reportedly sank into The Enemy I Know, one had expected a film with deafening resonance, not one you forget the moment you leave the cinema.