Beyond a Sophisticated Title

Review of The Ghost and the House of Truth:

When the name Ego Boyo is mentioned in connection with a film production, majority of moviegoers leap in excitement because Boyo hardly disappoints.  When she then decides to team up with Akin Omotoso (Vaya, Man on Ground) on a project, the enthusiasm goes sky-high.  That was the case in 2017 when they gave viewers A Hotel Called Memory, a silent film about a woman who is trying to cope with her impending divorce.

The collaborators return with The Ghost and the House of Truth, the story of a single mother who fights tooth and nail to find her missing daughter who disappears on her way from school.

This is one of the few productions where the Nigerian police is shown as an institution that responds to complaints by members of the public rather than a bribe-demanding and inducement-collecting organization.  When Bola (Susan Wokoma) offers Folasade Adetola (Kate Henshaw) some money out of her own freewill, Sade reminds Bola that it is not for nothing that everyone calls her ‘stainless’.

And this is a movie rich with symbols.  A pregnant police officer leads the manhunt for the missing girl.  It would be hard for a would-be-mother to contemplate the loss of a child to anything, let alone one that is about disappearance.

Bola, a social worker, whose day-job is to mediate between victims’ relatives and offenders, now sees herself on the other side of the divide and struggles to understand that one cannot be an unbiased judge in one’s own matter.  The point about taking the laws into one’s own hands is made loud and clear.

In spite of these merits, a number of drawbacks plague The Ghost and the House of Truth.  Why are there many out-of-focus shots, when it does not seem that there is a deliberate attempt to blur out adjoining or unrelated events as was the case in Andrew Dosunmu’s Mother of George?

The delivery by the actors would have been smoother if the producers had employed a dialogue coach.  In Nigeria, when a person speaks Pidgin English, a listener can almost tell if the person is speaking the Warri, Port Harcourt, Lagos or Jos variant of the language.  Of course, other towns also have their own dialects of Pidgin.  Sade, Ayodeji (Fabian Adeoye Lojede) and Bola’s lines in Pidgin English ‘no gel’ at all.  The language sounds very awkward in their mouths and the mouths of a few others such that it is decipherable that they are not used to it.

Bola and her daughter look too well-catered-for that it is almost unbelievable that they live in Makoko.

Almost every character in a film should be memorable, but many of the actors who play cameo roles in this movie are easily forgettable as they do not essentially catch the audience’s attention.  It is even more disappointing that many of them are recognizable faces, a pointer to poor character development.

In Keeping Faith (2001) directed by Steve Gukas and produced by Boyo, there were several of such roles which were also played by established actors.  Fred Amata as Simi, Zack Amata and Ebele Okaro-Onyiuke as Mr. and Mrs. Danladi respectively, Emma Edokpayi as the Boss as well as Ibidun Allison as Mama Sampa were all impressive characters.  Granted that in film-making, it is said that a scene should be handled the way a busy individual treats a party – arrive late, depart early; it is overdone in The Ghost and the House of Truth. 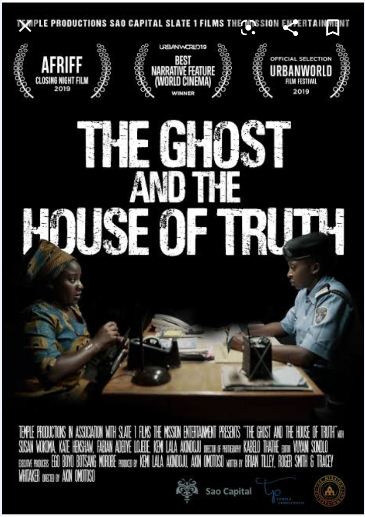 This reviewer once likened Ego Boyo to Sade Adu.  The latter has six albums to her credit; the first was released in 1984 while the last came out in 2010.  Similarly, in a film-making career spanning approximately a quarter of a century, Boyo has seven movies in her name as producer and/or executive producer: Violated (1995), Forever (1997), To Live Again (1998), Keeping Faith (2001), 30 Days (2006), A Hotel Called Memory (2017) plus The Ghost and the House of Truth (2019).  For the director of The Ghost and the House of Truth, Akin Omotoso, Vaya remains his magnum opus.

When all is said and done, this film is not one of Omotoso and Boyo’s finest, but we are sure that their best (both individual and collective) is yet to come.