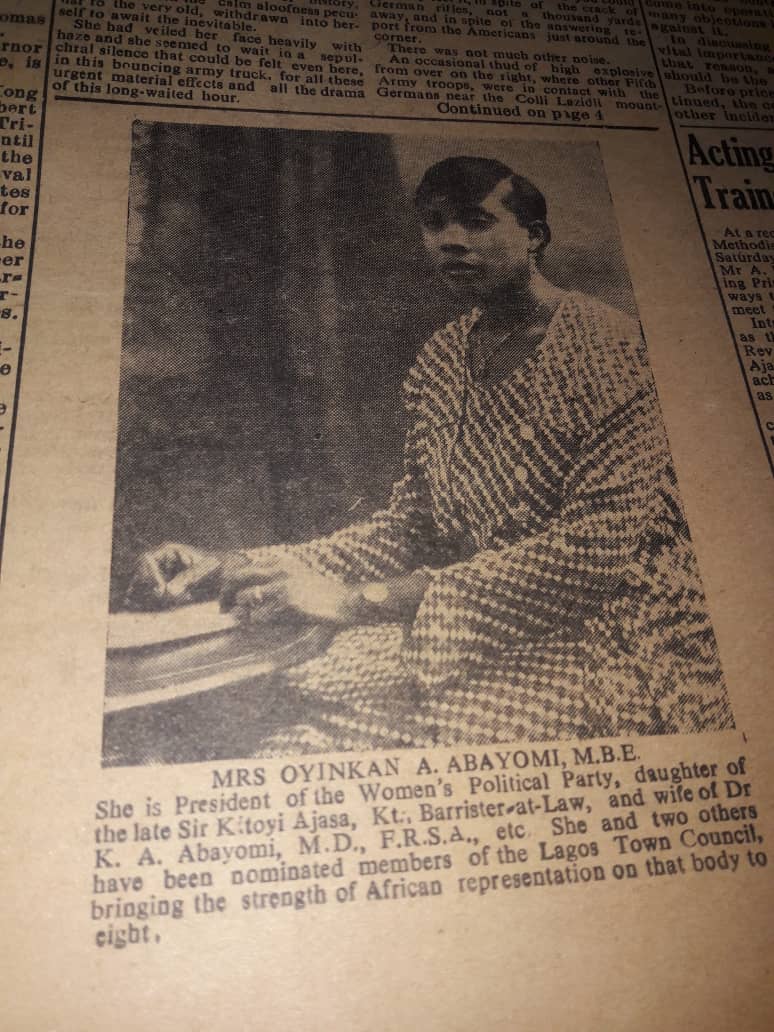 So Mrs. Oyinkan Abayomi MBE, daughter of Sir Kitoyi Ajasa, had had enough.

She was raised and schooled to be independent-minded and belonged to the category of women referred to in that era as “western-educated.”   But the colonial government was having none of the likes of Abayomi, and what more, the electoral qualifications were tailored towards keeping them out of the mainstream.

This was 1944 and Abayomi decided she was going to demonstrate that Nigerian women could participate in politics from a platform of their own. Married to medical practitioner, Dr. Kofoworola Abayomi, the couple set up home at 18, Broad Street, Lagos. Dr. Abayomi was one of the foundation members of the Nigerian Youth Movement and he took his wife to join the political organisation. However it did not take long for her to become disillusioned with the apparent marginalisation of women.

Lagos Colony and Calabar town were the hotbeds of all manner of 1920s political activity.  This was because according to the 1922 Constitution, there were to be four elected members – three from Lagos and one from Calabar – into the Legislative Council of Nigeria.  The electoral guidelines were clear. Men only! The Nigeria gazette of 28th September 1936 said as much:

Every male who is a British subject or a native of the Protectorate of Nigeria, who is of the age of twenty-one years or upwards and has been ordinarily resident for twelve months immediately preceding the date of registration in the Municipal Area….  in possession of a gross annual income of not less than one hundred pounds, shall be entitled to be registered as an Elector…… forms may be obtained from the Registering Office, Municipal Offices, Lagos.

The exclusion weighed heavily on Abayomi’s mind. Her visage may have been one of despair, but she mustered enough inner strength and decided to act.

On May 10, 1944 she invited some friends including Mrs S. Baptist and Mrs Tinuola Dedeke and some representatives of market women, such as Madam Ashimowu, chairwoman of Araromi Market Guild, to her Broad street residence, to form the Women’s Political Party.  The press were invited to the occasion and listened intently as she offered the political, socially and educational reasons why such actions were necessary. Moral reasons were given too: “The formation of this party should not only champion women’s cause, but also reduce the extreme selfish motive of menfolk,” she said.

“All political platform and discussions in Nigeria both in the Legislative and Municipal Councils, women’s interests have been sorely neglected,” she said. “Many women own houses in Lagos and yet there were no African woman in the Town Council.”

Abayomi was very clear that the menfolk did not want women to flourish within the public space.  This, she said was obvious from their response when the government decided to employ African women: “A stream of complaints arose from the men folk who contended that the proper place for women was the kitchen, and that the salaries offered were far too high.”

The thoughts of the male-dominant press also provides an insight:  “Lagos Women Revolt Against Old Africa and Organise their Own Political Party” reported the West African Pilot a day after the launch.

The results of the final elections of the Women’s Political Party published in yesterday’s issue of this newspaper reveal a welcome awakening on the part of the women of Lagos. No less than 2,358 members attended the elections and the choice of officers, so far as can be seen was well-made. Mrs Oyinkan Abayomi, MBE, retains the post of president with Mesdames Dorcas Macaulay,  S.H Baptist and Olajumoke Alakija as vice-presidents. In addition to the above appointments, two committees on health and education and market and local industry have been set up …… While no indication is given of the schemes of work of the committees, it is presumed that they will be concerned principally with the dissemination of knowledge on social ethics among the feminine community on the one hand, and in organising the market women for efficient service while sponsoring the growth of local industry on the other.  These proposals in our view, are not only praiseworthy but far-reaching and on paper makes good reading.

The cynical opinion in some quarters of the press about NWP was not lost on readers.  Notwithstanding, Abayomi was feted in the high echelons of Lagos society for this move. At a reception held for her at the Victoria Gardens of the Glover Hall, Lagos which was chaired by Oba Falolu of Decemo House; with several chiefs in attendance including Chiefs Oluwa, Ashogbon, Olutola and Sashore.  Chief C. Ola Oshodi and of course, her husband Dr. K. A. Abayomi, Madam Alimotu Pelewura, President of the Market Women’s Guild was also in attendance, described Abayomi as: “A social busy bee who had won the admiration of not only the women nor of this town alone, but also of the provinces and it is desirable to pay her due honour.” She recalled that it was in recognition of her activities that she was honoured with MBE by government.” The following day the news headline in the West African Pilot said: “Madam Pelewura says that Mrs Abayomi is stimulant to old and young,”

A few months after the formation of NWP, Abayomi was nominated to the Lagos Town Council where she served on the Public Health, Parks and Markets; and Juvenile Employment and After-Care Committees.  Her appointment attracted an editorial which hailed her appointment but also castigated the government for what it termed “too late and then after The Gambia and Sierra Leone.”

Six years after the formation of the NWP, , two women- Oyinkan Abayomi and Tinuola Dedeke contested elections from the platform of the NWP, in 1950,

The Women’s Political Party has gone down in history as a bold attempt to pool issues that affect women into the mainstream of colonial era politics.

HerStory is a creatively written historical series about Nigerian women. It was created by Tayo Agunbiade based upon true-life political stories out of The Archives. 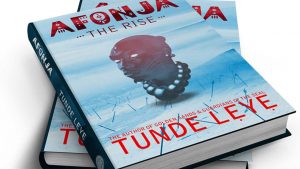 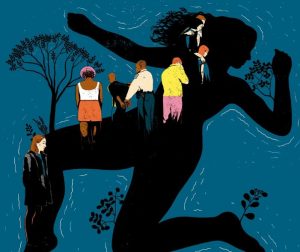