SOME NIGHTS AFTERWARDS, a furtive hand knocked on the door of Professor Belejayan.

The Professor woke up his wife. “Go and open the door, dear.”

“What is it?” she inquired drowsily

“Someone at the door.”

“Too bad. And why can’t you open the door yourself?”

“But my dear, in these times, I must be careful. He may be an enemy agent.”

At that moment, the knock was repeated. Mrs Belejayan, now awake, began to shiver violently.

“As the newly elected VC, I must not expose myself to unknown risks. Go and open the door, my dear.”

Mrs Belejayan conquered her violent shivering, silenced her chattering teeth, and rose up heroically from the bed.

“He will not get my children,” she swore, tying her wrapper around her like an armour. “Not today! And if he comes tomorrow he won’t get them either! I shall defend them with the last drop of my blood, or I am not my mother’s daughter!”

And with that resolve she marched off into the children’s room from where the Professor soon heard the sound of the door being latched from behind.

Thus abandoned – in defiance of the marital oath, he thought, — the Professor searched about him wildly, but could find no weapon of defence, save his slippers. 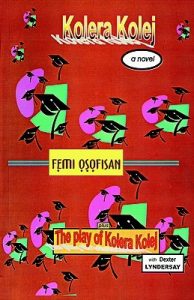 A dangerous anger filled his professorial breast. Why was he always so careless, he cursed himself? Why had he not thought of having the house surrounded by guards as befitted his imminent rank? And why had he not hidden a cutlass in the room? Or procured charms? Those neglects, he vowed, would be remedied at the first opportunity. Meanwhile … He winced as the knock was again repeated. Then, with epic resolution, he went towards the door.

Excerpted from Kolera Kolej, a novel by Femi Osofisan, first published by New Horn Press 1975. It is one of the texts selected for conversation at the Lagos Book & Art Festival, November 9-15, 2020. 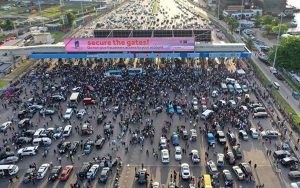 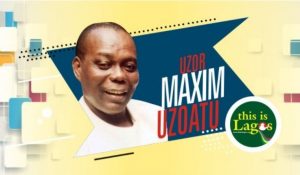