Badetona was genuinely possessed of a retiring temperament.

Left to him, he would even have discarded his princely title but, that was now part of his existence, and it also had its advantages.

Jaiyesola however saw it differently. The position lacked public recognition. A prince without a throne – it would not be the turn of his royal line for another century. And then, despite the streak of genius that he had exhibited all the way from schooldays and into public service, in her own parlance – nothing to show for it.

She looked at his close circle of associates, some of them members of the prestigious Motor Boat Club of Ikoyi, or the Lagos Island Indigenes Club, Freemasons and Rosicrucians, and felt that Badetona was short-changed in social entitlements. The title of Internal Auditor sounded in her ears like a life sentence in solitary confinement on a diet of garri and water. So she took her case to God, albeit without her husband’s knowledge. Who was to tell her that it was not a wife’s duty to boost her spouse to greater heights?

Then commenced a series of omens. Prayers answered, and in such generous helping, Badetona began to encounter a flurry of mishaps that moved, in her view, beyond mere coincidence. First, his customised computer crashed. That was unprecedented. Next, he stubbed his toe against a protruding table leg – the left toe! – it was one of those ultra- modernistic designs that catered more to sensation than sense. Was it a coincidence that she had terrible dreams that same night? It did not take too long afterwards before the newly appointed Chief Executive Director locked himself out of doors, having left his key wallet in the office.

Jaiyesola had also traveled for her Christian pilgrimage, undertaken two weeks after her return from accompanying her Moslem friend to Saudi Arabia for the lesser Hajj – both were followers of the ministry of Papa Davina’s Ekumenika. His phone battery also chose that night to run down – ah yes, the long-distance call from Jaiye in Hebron, with a protracted argument on why she should not fill her suitcase with holy water from River Jordan where her spiritual journey had next directed her feet.

The Scoffer slept that night on the back seat of his SUV, locked in the garage. He had returned late from yet another party in his honour, and his mildly groggy condition – he was a moderate drinker – wasted no time in sending him off to sleep. Opening the garage door for some fresh air the following morning, he heard a scrabbling in the top jamb of the door. Before he could look up to investigate, a scaly creature dropped, landed on the balding middle patch of his head, its thin claws instantly trapped in the surrounding tufts of foliage. Bade’s first thought was – snake! Next, scorpion. 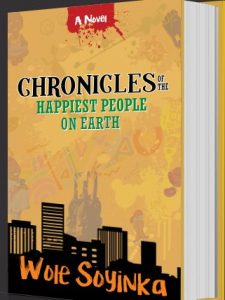 He leapt out under imminent heart failure, uncertain how to deal with what he could not see, collided with the housemaid who was just reporting for duty. She took to her heels screaming for help against the intruder before she realised who it was. The mystery squatter seized on the confusion to escape, thus finally identified for what it was – a lizard. The maid would later narrate ‘the scariest moment of my life’ to Mrs Badetona on her return from pilgrimage.

Confronted with her report, Bade roared with delight and added it to her list of portents. His last contribution, a mere week earlier, was the black cat he had found sitting on his car bonnet as he stepped out of the supermarket. He relished the rapidly changing registers on her face, especially when he went into details over the one-sided confrontation. The cat refused to budge even after he had started his car and begun to inch forward – my dear, that cat, I swear, kept staring at me through the windscreen as if to complain she had been looking forward to the ride. I had to stop and engage the security guard to help shove it off, so I could drive off.

Were all these little more than an occult build-up towards the piece de resistance that was yet to come?

Excerpted from Chronicles of the Happiest People on Earth, a novel, by Wole Soyinka, Bookcraft, 2020.