Positive buoyancy in prose is to be prized in any language, for it is uncommon. And there is something of extra compelling power to books that almost never got written. In the case of The Road Never Forgets, there was the distinct possibility that the author would never have been born in the first place had his father, a stowaway at 17, not survived a con that left him stranded in Freetown when he was promised new life in America. But some stories must be written for posterity and this is one such talismanic tale. Charged throughout with surprises in the light in which we see personalities we thought we knew and revelatory of otherwise hidden chapters that have only been half-told over past decades, The Road Never Forgets has added solid text to the African trove with these new memoirs that double as remarkable literary accomplishments.

From the eloquent, deeply insightful foreword by Professor Biodun Jeyifo and the incantatory proem by Professor Niyi Osundare to the author’s own opening chapter which caroms off T.S Eliot’s The Waste Land, with a firm rebuttal of the assigned cruelty of April, we begin to have an inkling of the literary treat we’re in for. Both the author and his father were born in April. By the time we put down the book, we’ve had a grand tour of ideas and their creators; from Shakespeare to Soyinka, MKO Abiola to Fela Anikulapo-Kuti – the canvass is broad and teeming with vivid, colourful characters.

He is a practiced lover who nevertheless always prioritizes fulfilment of the beloved. This form of literary chivalry is endearing to readers who have come to encounter – more and more – the self-absorption of autobiographical material in the 21st century.

A writer with less natural talent or confidence would founder and yield to the temptation to indulge in verbiage. In the making of these memoirs, Dr. Ogunbiyi seems to pluck endlessly from an array of sources and replenishing literary resources so that when the reader comes to the last page, there is a feeling of not only having gone through the memoirs of an accomplished memoirist, but of holding the memorabilia from the mental journey. He gives of himself, for sure, but he also retrieves moments, events and milestones with a collector’s eye. A country now so remote as to reside in the rising mists of legend is represented as three-dimensionally as language allows, and with the added boon of trace scents and tactile trophies. The writing is all the more successful because it rarely draws attention to itself. Instead, we see figures from our history in refreshing, human light. Dele Giwa isn’t just the sterling journalist who was tragically cut down in his prime with a letter bomb but a man who earned the respect of his contemporaries, mortal as any and willing to expend himself enough to herniate a disc while serving as pallbearer at the funeral of the author’s aged father. So, we know that Nigerian funerals were not always the paid-for spectacles so ubiquitous today. Even when the event affects the author directly, he finds a way to make it read as from a bird’s eye view. When, for example, Chief MKO Abiola arrived Stockholm for Nobel Laureate Wole Soyinka’s award, Ogunbiyi was the one who gave up his own slot at dinner for the mogul because, well, the Swedes like to have their dinners planned. Swedish dinners have been trending lately but the take in this book is so refreshing.

This is a book to travel with, it is large and eloquent. Someday, we hope in our lifetime, it would be possible to board a train from Lagos to Dakar, with stops at Lome, Accra, Freetown and all the cities in this magnificent book of memoirs. By the time I was halfway into The Road Never Forgets, I found that there were newer, often more interesting ways of inhabiting Ibadan, my own city, and of reliving my days at the University of Ife, arguably the most successful crystallization yet of a people’s aspirational reach for knowledge and culture in modern times on the African continent.

Self-regard as a journalist, and not just of a Nigerian brand, but of an African brand, is everywhere in the journalism years of the author – Stanley Macebuh was both his teacher and his colleague. Interviewing every world leader of the time including Obafemi Awolowo, Margaret Thatcher, Rajiv Ghandi and Benazir Bhutto – the kind of work one sees perhaps only in the Mail & Guardian of South Africa these days, is sobering. Only Ronald Reagan is missing – and not for want of trying. But these were at a point in time at which Nigeria had greater GDP per capita than China. It is a lot to ponder but a worthwhile diversion.

The past is a foreign country: they do things differently there, said L. P Hartley. Anyone lucky enough to have Ogunbiyi as guide in that lost country would have no choice but to weep at the war of prodigality that we waged against ourselves as Nigerians.

It’s a feast, from the lapidaries of Ibadan and Ilé Ifẹ̀ to the metropolitan ferments of New York and Stockholm. And, we have a generous and gifted raconteur who can parse between the subtle syntax of his homeland and the stark semiotics of steel and glass skyscrapers with their tendency toward sensory overload. If Proust is on the innermost lane and Karl Ove Knausgaard is on the outermost, Ogunbiyi occupies the middle lane in the race to evoke time and place. Between fire and ice, what tropic tropes Yemi Ogunbiyi touches muster all the atmosphere we know to be Africa and the African without ever devolving into the exoticism that some Afropolitan works present of Africa. And yet, one wonders, would these memoirs have turned out differently if, say, instead of New York, the author had pursued postgraduate studies in Oxford, Cambridge or London? The author’s own self-awareness brings up some of these roads not taken and the reader is invited to guess.

Ogunbiyi has the advantages of linguistic access and interpretive power so that when he describes Kano at about the time his parents moved there, for example, the reader in English has a more nuanced understanding of a city that retains a copious amount of mystery even today. In addition to these, the memoirist in Ogunbiyi is often a conscious translator of language. The overall effect on his reader is an impression of attentiveness to the reader’s experience – he is a practiced lover who nevertheless always prioritizes fulfilment of the beloved. This form of literary chivalry is endearing to readers who have come to encounter – more and more – the self-absorption of autobiographical material in the 21st century.

As a stylist, Ogunbiyi holds his own with considerable panache and aplomb. There is justification for every detour, every anecdote, every extra brought on to reiterate the context of a narrated episode. The ability to do this without importing the repugnance of unnecessary artifice is a gift the author wields with the seeming laissez-faire of a Professor Peller. These memoirs are eloquent but they are also fluent in the various dialects of silence. A reader follows the trails and contrails but is as free to simply gaze upon the vast multitudes of recollections in this magnificent book.

For some reason I cannot put a finger on, when I put this book down after the last page, I remembered an encounter I had in Niamey, years ago, with a Touareg businessman who was responsible for moving my party of writers around the city. He said that among his people, a man who intimates his kinsmen of his intention to marry from a different social stratum is counselled to pluck a branch from a tree on his way to the home of the lady. The man is then encouraged to take the same path on his way back and to try to reattach that branch to the tree from which it was initially torn. The point is to say that the task he plans to undertake will be difficult and much will depend on his very precise understanding of horticulture. Why, of all such apparently forgotten encounters in the life of this reader, did this book so effectively dowse that singular Sahelian event? I have no ready answers but hazard a guess that this book has such powers as a touchstone that it not only served its author so well but that it holds a promise to do the same for the reader as well. Or, the transcendental moment is tribute to the skill of a writer that would doubtless be referenced in classrooms wherever memoirs are taught around the world.

So, we know that Nigerian funerals were not always the paid-for spectacles so ubiquitous today. Even when the event affects the author directly, he finds a way to make it read as from a bird’s eye view.

Were the great Eric Wolf alive at this time to share the bounties in these memoirs with us, he would remind his audience that Africans are not people without history as some Europeans and their descendants are wont to think. Africans, in fact, are the very stuff of history. That some of that cornucopia is now accessible to the world is the good fortune of living in the 21st century and of sharing the planet with a writer like Yemi Ogunbiyi. 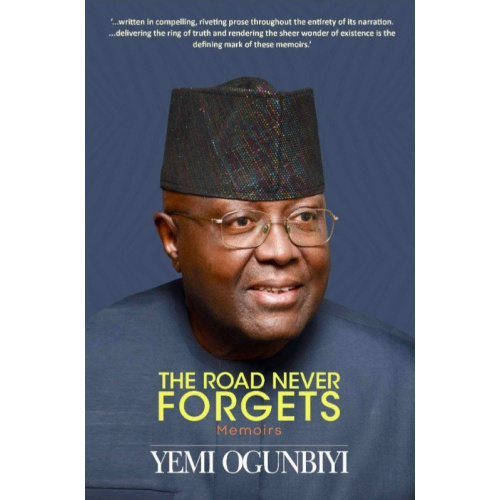 -Tade Ipadeola is a Nigerian poet and practicing lawyer who writes in English and Yoruba. In 2013, his poetry collection The Sahara Testaments won the prestigious Nigeria Prize for Literature instituted by the Nigeria Liquified Natural Gas (NLNG). In 2009, he won the Delphic Laurel in Poetry for his Yoruba poem Songbird at the Delphic Games in Jeju, South Korea.